PFC. Bernard T. Fitzpatrick
Born: 23 February 1915 – Waverly, Minnesota
Parents: Florien Fitzpatrick & Catherine Shafranski-Fitzpatrick
Siblings: 4 sisters, 2 brothers
Nicknames: B.T., Bernie, Fitz
Graduated: College of Saint Thomas
– Class of 1938
Parents:
Hometown: Waverly, Minnesota
Residence: 605 Portland Apt #2 – Ramsey, Minnesota
Occupation: Bankers Life Insurance Agent
Selective Service Registration: 16 October 1940
– Next of Kin: Mrs. Florence Padden – sister
Inducted:
– U. S. Army
– 14 April 1941 – Fort Snelling, Minnesota
Units:
– A Company, 194th Tank Battalion
Training:
– Fort Lewis, Washington
– described as constantly raining during the winter
– many men ended up in the camp hospital with colds
– Typical Day – after they arrived at Ft. Lewis
– 6:00 A.M. – first call
– 6:30 A.M. – Breakfast
– During this time the soldiers made their cots, policed the grounds around the barracks, swept the floors of their barracks, and performed other
duties.
– 7:30 A.M. to 11:30 A.M. – drill
– 11:30 A.M. – 1:00 P.M. – mess
– 1:00 P.M. – 4:30 P.M. – drill
– 5:00 P.M. – retreat
– 5:30 P.M. – mess
– men were free after this
– a canteen was located near their barracks and was visited often
– the movie theater on the base that they visited.
– The theater where the tanks were kept was not finished, but when it was, the tankers only had to cross the road to their tanks.
– Saturdays the men had off, and many rode a bus 15 miles northeast to Tacoma which was the largest town nearest to the base
– Sundays, many of the men went to church and services were held at different times for the different denominations
– later the members of the battalion received specific training
– many went to Ft. Knox, Kentucky for training in tank maintenance, radio operation, and other specific jobs
– Fort Knox, Kentucky
– radio school for three months
– qualified as a radio operator

Note: On August 15, 1941, the 194th received orders, from Ft. Knox, Kentucky, for duty in the Philippines because of an event that happened during the summer. A squadron of American fighters was flying over Lingayen Gulf when one of the pilots noticed something odd. He took his plane down and identified a buoy in the water. He came upon more buoys that lined up, in a straight line for 30 miles to the northwest, in the direction of a Japanese occupied island, hundreds of miles away, with a large radio transmitter on it. The squadron continued its flight plan and flew south to Mariveles before returning to Clark Field. By the time the planes landed that evening, it was too late to do anything that day.

The next morning, another squadron was sent to the area and found that the buoys had been picked up by a fishing boat which was seen making its way toward shore. Since communication between and Air Corps and Navy was poor, the boat was not intercepted. It was at that time the decision was made to build up the American military presence in the Philippines.

“According to War Department records, you have been designated as the emergency addressee of  PFC Bernard T. Fitzpatrick, 37, 026, 113, who, according to the latest information available, was serving in the  Philippine Islands at the time of the final surrender.

“I deeply regret that it is impossible for me to give you more information than is contained in this letter.  In the last days before the surrender of Bataan, there were casualties which were not reported to the War Department.  Conceivably the same is true of the surrender of Corregidor and possibly other islands of the Philippines.  The Japanese Government has indicated its intention of conforming to the terms of the Geneva Convention with respect to the interchange of information regarding prisoners of war.  At some future date, this Government will receive through Geneva a list of persons who have been taken prisoners of war.  Until that time the War Department cannot give you positive information.

“The War Department will consider the persons serving in the Philippine Islands as “missing in action” from the date of surrender of Corregidor, May 7, 1942, until definite information to the contrary is received.  It is to be hoped that the Japanese Government will communicate a list of prisoners of war at an early date.  At that time you will be notified by this office in the event that his name is contained in the list of prisoners of war.  In the case of persons known to have been present in the Philippines and who are not reported to be prisoners of war by the Japanese Government, the War Department will continue to carry them as “missing in action” in the absence of information to the contrary, until twelve months have expired.  At the expiration of twelve months and in the absence of other information the War Department is authorized to make a final determination.

“Recent legislation makes provision to continue the pay and allowances of persons carried in a “missing” status for a period not to exceed twelve months;  to continue, for the duration of the war, the pay and allowances of persons known to have been captured by the enemy; to continue allotments made by missing personnel for a period of twelve months and allotments or increase allotments made by persons by the enemy during the time they are so held;  to make new allotments or increase allotments to certain dependents defined in Public Law 490, 77th Congress.  The latter dependents generally include the legal wife, dependent children under twenty-one years of age and dependent mother, or such dependents as having been designated in official records.  Eligible dependents who can establish a need for financial assistance and are eligible to receive this assistance the amount allotted will be deducted from pay which would otherwise accrue to the credit of the missing individual.

“The last report of casualties received by the War Department from the Philippines arrived early in the morning of May 6. Through this date, Private First Class Bernard T. Fitzpatrick had not been reported as a casualty. The War Department will consider the persons serving in the Philippine Islands as “missing in action” from the date of the surrender of Corregidor, May 7, until definite information to the contrary is received.

“Efforts to secure prisoner of war lists from the Philippines have not been successful to this date due to the lack of communication and the fact that the Japanese Government has not yet given permission for the Swiss representative and the International Red Cross delegates to make visits to prisoner of war camps in the islands. When the lists of prisoners are received, we will clear the name of your son and send you any additional information that we may have.”

– Cabanatuan
– original name – Camp Pangatian
– Philippine Army Base built for 91st Philippine Army Division
– put into use by the Japanese as a POW camp
– actually three camps
– Camp 1: POWs from Camp O’Donnell sent there in an attempt to lower the death rate
– Camp 2: two miles away
– all POWs moved from there because of a lack of water
– later used for Naval POWs
– Camp 3: six miles from Camp 2
– POWs from Corregidor and from hospitals sent there
– POWs later moved to Camp 1
– Camp Administration:
– the Japanese left POWs to run the camp on their own
– Japanese entered camp when they had a reason
– POWs patrolled fence to prevent escapes
– Note: men who attempted to escape were recaptured
– Japanese beat them for days
– executed them
– “Blood Brother” rule implemented
– if one POW in the group of 10 escaped, the other nine would be killed
– POWs patrolled fence to prevent escapes
– Barracks:
– each barracks held 50 men
– often held between 60 and 120 men
– slept on bamboo slats without mattresses, covers, and mosquito netting
– diseases spread easily
– no showers
– Morning Roll Call:
– stood at attention
– frequently beaten over their heads for no reason
– when POWs lined up for roll call, it was a common practice for Japanese guards, after the POWs lined up, to kick the POWs in their shins with their
hobnailed boots
– Work Details:
– Work Day: 7:00 A.M. to 5:00 P.M.
– work details sent out to cut wood for POW kitchens, plant rice, and farm
– they also were frequently hit with a pick handle, for no reason, as they counted off
– POWs on the rice planting detail were punished by having their faces pushed into the mud and stepped on
– the POWs had to go into a shed to get the tools, as they came out, they were hit on their heads
– if the guards on the detail decided the POW wasn’t doing what he should be doing, he was beaten
– many POWs on details were able to smuggle in medicine, food, and tobacco into the camp
– to prevent escapes, the POWs set up patrols along the camp’s fence
– men who attempted to escape and caught were executed after being beaten
– the other POWs were forced to watch the beatings
– Two main details
– the farm and airfield
– farm detail
– POWs cleared land and grew camotes, cassava, taro, sesame, and various greens
– Japanese took what was grown
– Guards:
– Big Speedo – spoke little English
– in charge of the detail
– fair in the treatment of POWs
– spoke little English
– to get POWs to work faster said, “speedo”
– Little Speedo
– also used “speedo” when he wanted POWs to work faster
– fair in the treatment of POWs
– Smiley
– always smiling
– could not be trusted
– meanest of guards
– Airfield Detail:
– Japanese built an airfield for fighters
– POWs cut grass, removed dirt, and leveled ground
– at first moved dirt in wheelbarrows
– later pushed mining cars
– Guards:
– Air Raid
– in charge
– usually fair but unpredictable
– had to watch him
– Donald Duck
– always talking
– sounded like the cartoon character
– unpredictable – beat POWs
– POWs told him that Donald Duck was a big American movie star
– at some point, he saw a Donald Duck cartoon
– POWs stayed away from him when he came back to camp
– Meals:
– daily POW meal – 16 ounces of cooked rice, 4 ounces of vegetable oil, sweet potato or corn
– most of the food the POWs grew went to the Japanese
– Camp Hospital:
– 30 Wards
– each ward could hold 40 men
– frequently had 100 men in each
– two tiers of bunks
– sickest POWs on the bottom tier
– each POW had a 2 foot by 6-foot area to lie in
– Zero Ward
– given the name, because it had been missed when counting wards
– became ward where those who were going to die were sent
– fenced off from other wards
– Japanese guards would not go near it
– POWs sent there had little to no chance of surviving
– medical staff had little to no medicine to treat sick
– many deaths from disease caused by malnutrition
– Burial Detail:
– POWs worked in teams of four men to bury dead
– carried as many as six dead POWs in each litter to the cemetery
– buried in graves that contained 16 to 20 bodies
– 9 July 1943 – his name appeared on a list of known Prisoners of War held by Japanese
– his parents learned he was a POW weeks earlier

“The Provost Marshal General directs me to inform you that you may communicate with your son, postage free, by following the inclosed instructions:

“It is suggested that you address him as follows:

“Packages cannot be sent to the Orient at this time. When transportation facilities are available a package permit will be issued you.

“Further information will be forwarded you as soon as it is received.

“Mr. and Mrs. F. Fitzpatrick: The secretary of war has asked me to inform you that your son, PFC Bernard T. Fitzpatrick was returned to military control Sept. 17 and is being returned to the United States within the near future. He will be given the opportunity to communicate with you upon his arrival if he has not already done so.

Acting Adjutant General of the Army” 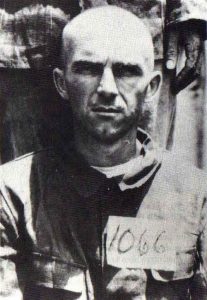